The Last Magician in Blue Haven

THE LAST MAGICIAN IN BLUE HAVEN by Mark Roessler illustrated by Donald Hundgen …is an old-fashioned tale that will amuse and enlighten, a good story for children and adults (Grades 4 and up).

From The Book Reader: THE LAST MAGICIAN IN BLUE HAVEN, By Mark Roessler, with illustrations by Donald Hundgen, Hundelrut Studio, paper. Thank goodness there’s still magic out there! This is a charming collaboration of works and art that spins the reader into a fairyland called Blue Haven, a county with such villages as West Pudding and, across the river (just past Chevy’s Ford), Lumpwich. The people of Blue Haven celebrated autumn each year with a festival. Magicians in colorful wagons performed tricks rare and wonderful every night for two weeks. Then a young doctor who acted old came from the big city. Competent, he was, but cold. “Always knows what’s wrong with you. Quicker than an ant on a sandwich, he is.” But he didn’t talk to you. Or take a barrel of grain in payment ’till better times. But worse! He exposed all the magicians’ tricks. In time, Dr. Gengeloof ruined all harvest festivals as magicians failed to return. Except for Robin and his dwarfs, “who pulled out strings of light that and turned about your head.” A challenge for the doctor: expose the last magician. Gengeloof studied his books, scratched his head. Robin’s dwarfs! They must hold the secret. In the woods, Gengeloof pulled back the hood to reveal a dwarf’s face. And suffered the best magic ever. The doctor never returned to Blue Haven. But the Magicians did, to protect young and old from the torrents of reality. A refreshing tale, brimming with hope and light. 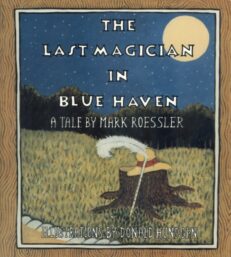 You're viewing: The Last Magician in Blue Haven $10.00
Add to cart